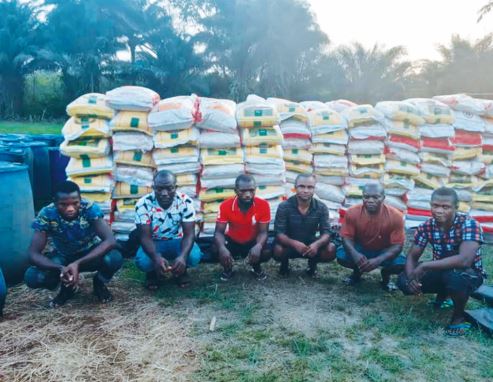 Six suspected rice smugglers have been arrested by the Nigerian Navy who also intercepted 1,439 bags of rice.

Five patrol operations carried by the Nigerian Navy personnel, led to the arrest of the suspects at Unyenge, Effiat and Mendoro creeks in Akwa Ibom State.

Commanding Officer of Nigerian Navy’s Forward Operating Base, Ibaka in Mbo Local Government Area of Akwa Ibom State, Captain Peter Yilme disclosed that two suspects were arrested on January 13 with 803 bags of 50kg rice, while 185 bags of rice was seized on Janaury 2 from suspects who escaped upon seeing the naval gunboats.

“I handover 1,439 bags of rice and six suspects to the Superintendent of Customs, Garuba Hassan, in line with the directives of the Chief of Naval Staff. We are committed to rid the waterways of all forms of illegalities.

“I commend the untiring efforts of the officers and ratings in ensuring the mandate and tasks of the Base are achieved. I also appreciate the immense effort of the Chief of Naval Staff, Vice Admiral I. E. Ibas, for providing the necessary platform and logistic support for the Base to carry out its operations.”

WE NEED EACH OTHER TO SURVIVE BY ELIZABETH DESTINY TIMOTHY